Universal Diagnostics (Universal DX), a bioinformatics and multi-omics company on a mission to transform cancer into a curable disease, announced the results of a proof of principle study demonstrating that the analysis of microbiome signatures in plasma can assist in early detection of colorectal cancer (CRC).
This advancement follows the company’s promising early findings that revealed early-stage colorectal cancer detection through analysis of cell-free circulating tumor DNA (ctDNA) methylation, mutation and fragmentation patterns by using targeted sequencing analysis, advanced computational biology and machine learning algorithms to detect colorectal cancer and advanced adenomas.
“While methylation, mutation and fragmentation are still the core of early CRC detection, we think microbiome is an interesting addition to our proprietary technological platform Signal-X as we build out the platform,” said Christian Hense, COO at Universal DX. “As we learn more about microorganisms and how they interact in communities within our bodies to change the way we feel and function, we hope this type of data analysis will help patients get access to earlier and more sensitive screening, individualized guidance for treatment, and advanced monitoring techniques.”

Over the last two decades, microbiome has become a key focus in the nutrition field, giving clinicians and patients a window into how diet and gut bacteria plays into overall health. The data presented by Universal DX shows that microbiome research can have a profound impact on other areas of healthcare, such as oncology. This body of research from Universal DX is being used to build “Signal-X”, a platform to detect multiple types of cancer. Its first product, “Signal-C”, detects early-stage colorectal cancer and adenomatous polyps.
“The data are clear: by detecting cancer earlier, we can save more lives,” said Dr. James Kinross, Consultant Surgeon at Imperial College London and co-author of the study. “While we have a way to go until we can catch all cancers in their earliest stages, we continue to make great and promising progress. The work Universal DX is doing on Signal-X is one example. Much less invasive than a colonoscopy, accurate liquid biopsies will likely increase screening rates, improve outcomes and save lives.”

Hense continued: “Colorectal cancer is the third deadliest cancer in the United States. When it is detected early, the 5-year survival rate increases from 60% to 90%. This staggering difference is something we can’t ignore. At Universal DX, we are committed to finding better detection methods that catch dangerous cancers as early as possible, so that we can save lives. Microbiome signatures are a promising avenue, but this is just the beginning.”
The company presented it findings live at ESMO in Paris on September 11th; abstract 358P – Analysis of microbiome signatures in plasma for early CRC detection.

About Universal Diagnostics
Universal DX is on a mission to transform cancer into a curable disease. With its multi-omics + computational biology + machine learning approach, it is cracking the code to “true” early cancer detection, having identified the specific cfDNA sequence regions that capture cancer’s earliest signal with +90% accuracy. Its first single-draw blood test, Signal-C, detects colorectal cancer with high accuracy, including earlier and pre-cancer stages. The company’s multi-cancer platform seeks to identify the unique DNA sequence regions associated with high-burden cancers, such as pancreatic, liver and stomach, with high sensitivity and tissue-of-origin specificity.

For more information about the company, visit https://www.universaldx.com/.

Study characterizes alterations of the gut microbiota in Crohn’s disease 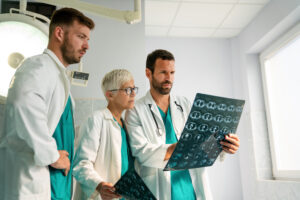